thegman (Garry Taylor) is writing a desktop for QNX, and needs a little input and feedback to assess demand, check out the screenshots and see what you think.

A desktop for QNX Neutrino

Disclaimer: This article, or the project mentioned within it have no relation to (and is not endorsed by) QNX Software Systems.

This article is designed to assess demand for a desktop environment which will run on top of the QNX Neutrino Operating System (www.qnx.com). This project started after seeing numerous new users to QNX heaping praise upon the OS, but having only one lament, the lack of a desktop. Some of the design is loosely based around screenshots of the ill-fated QNX-based Amiga OS, other aspects are based on the Indigo Magic desktop on SGI's IRIX. There are also influences from Apple's Mac OS X and Castle Technology's RISC OS. In the absence of a good name, the desktop will hereby be referred to as 'the desktop'.
The desktop's main constituents are:

The Desktop - This replaces the existing Photon backdrop with a desktop more familiar to desktop users.

The Dock - The user can have as many docks as he/she likes, and is a simple, scalable, program launcher.

Misc. Tools - There are other tools to simplify use of network shares, new terminal program etc. Other simple utilities will also be supplied.

Most aspects of appearance such as filer/desktop/dock backdrops, icons, icon size etc. are highly configurable and other areas are likely to change/be improved before final release.

A question that many will ask is 'Why should I use QNX, and not _insert_favourite_operating_system_?'. Well, QNX has many advantages (as well as disadvantages), of which I will outline a few here.

No website about a new desktop would complete without an array of screenshots, all of these screenshots are of the actual desktop, there are no mockups. 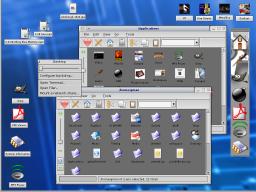 1) A general view of the desktop showing Applications, and the current user's home directory. 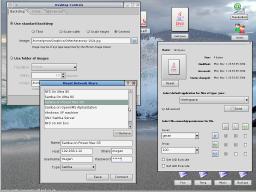 2) A view of various tools such as 'Get Info', 'Mount Network Share', and the desktop controls. 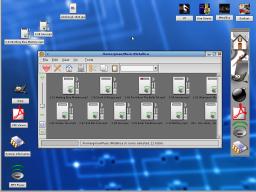 3) A view of a folder of MP3 files. This screenshot demonstates the use of 'icon plugins' to allow MP3s to be played directly from the filer. This plugin also provides every MP3 file with a Play, Pause & Stop button, and also a progress bar showing progress through the song. An 'icon plugin' could also be applied to any other file format, to allow other features to be added. 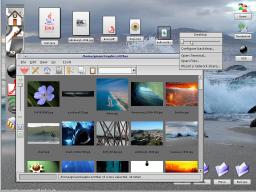 4) Another general view of the desktop, including thumbnails of graphics files. It also demonstrates that icons can be displayed at varying sizes, on the desktop and in filers. 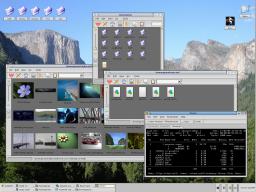 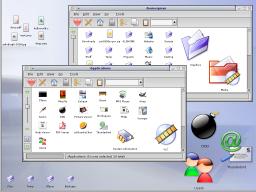 6) A general view of the desktop showing modified desktop and filer appearance. 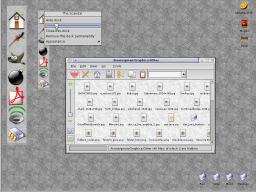 7) A general view of the desktop showing resizable dock, with a RISC OS style appearance. 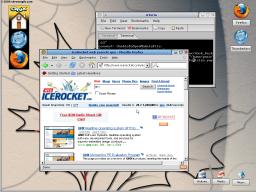 8) A view of the desktop showing a dock with a different theme, and Firefox 1.0 (ported to QNX by Adrian Mardare).

The descriptions above represent the features which are already complete, but there are lots more on the list.

No beta testers are required at the moment, but a beta version may be available before full release.

As mentioned, the aim of this article is to decide if there is sufficient demand to productize the desktop, and to offer it for sale. So if you want to make your thoughts known, please vote in the poll, and if you want to ask any specific questions, please send me a Private Message or discuss in the forum.